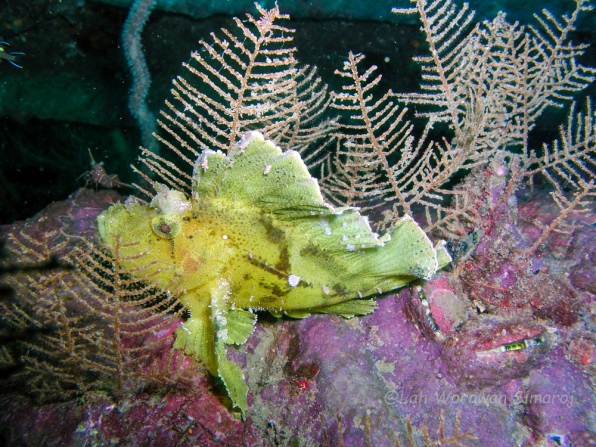 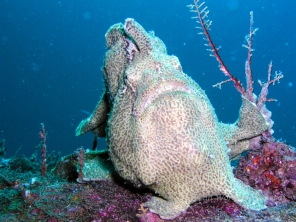 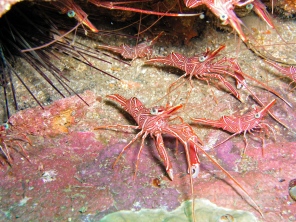 At last, my wish was fulfilled.  I had finally returned to the Spratlys in the South China Sea after promising myself that I would do so after I had last visited them three years ago.  Once again, I was back onboard the luxurious Thai-registered live-aboard MV Dive Master I, which operates dive trips from Labuan Island to the Malaysian-held territories of the Spratlys, during the off-season in the Thai Andaman.

A brief diving stop at Cement Wreck, not far from Labuan, revealed some eerie creatures like Giant Frogfish, Leaffish, Sawblade Shrimps and many others, none of which I saw here 3 years ago.  This was because the dive masters on our vessel were familiar with and had much experience of the dive sites here.  As soon as our heads dipped below the waves, they led us to known locations without us having to waste time looking for them.  After this, we set out on the long 16-hour journey on the vessel to the Swallow Islands or Layang Layang which was not that bad due to the calm weather.  This time, we were accompanied by several fishing boats participating in the annual Labuan deep-sea game fishing tournament.  They fish here because the Malaysian Spratlys consist of several oceanic atolls and seas that reach depths of over 2,000 metres in certain areas.  Large pelagic fish and numerous deep-sea fish can be found in the area meaning that game fishing is popular and well-established here, much more so than diving.

Upon arriving at Layang Layang, our boat manager went to check in at the military base on the island as usual.  The Spratlys actually cover a marine area of more than 400,000 km2 though the land area of less than 5 km2 lies in a sensitive contested zone.  Each of the more than 650 reefs, islets, atolls, cays and islands have been claimed by 6 different countries; China, Taiwan, Malaysia, Philippines, Brunei and Vietnam.  Some are still disputed.  That’s why we had to report to the Malaysian military when we entered their zone.

After a disappointing dive in the morning (we didn’t see hammerhead sharks), we headed off to Dallas Reef or Terumba Laya, another Malaysian-claimed atoll 1.5 hrs to the north of Layang Layang.  The shallow reef enclosing a lagoon could be seen as we approached.  The water was so nice and clear, with the sunlight creating different shades of blue and green depending on the depth.  Only some parts of the reef can be seen above the water at low tide.  We jumped into the water on the southeast wall of this huge atoll but after 15 minutes of hanging in the deep blue water our hopes of seeing hammerheads or other large creatures faded.  As we headed back to the reef, yellow soft corals dominated the wall and lots of coral reef species could be observed.  Just before resurfacing, a large black Manta Ray slowly glided by us.  What a creature!  The following dives at other sites on the reef increased our excitement.  A huge Marbled Ray, Grey Reef Sharks, Whitetips, a school of Oceanic Triggerfish coming from the depth to lay eggs, and many other species were observed on the sandy floor near the reef that was adorned with beautiful Sea Whips and Sea Fans.

Since the wind and waves in the open sea seemed to be on our side, we decided to head northwards for another 2.5 hours to the Mariveles Reef or Terumba Mantanani.  This huge sandy cay, surrounded by two lagoons and a reef has been under occupation since 1986.  After reporting to the stationed soldiers, our vessel headed to the southeast of the reef.  Nobody in the boat, not even our dive leaders, had dived here before.  Something might be waiting for us below.  We used the dingy to get close to the reef, rolled back, let out the air, dived down and I was freezing.  It wasn’t due to anything serious or dangerous; it was simply due to the tremendous scene around me.  Uncountable numbers of huge sea fans extended their branches from the wall and were interspersed with black corals, soft corals and other hard corals.  I felt like I had just discovered a huge untouched primitive virgin forest abundant with giant trees and diverse flora.  In more than ten years of diving, I had never seen any site like this before.  All the sea fans were complete with no damage from human activities.  Below the depth of 35 metres where I was, and right up to the shallower reef above, these marvellous corals were to be found.  This showed me that the water here was very clear allowing the sunlight to penetrate and the corals to grow healthily even below 40 metres.  Forget looking for large fish, I swam here and there admiring my new discovery.  Thanks to the nitrox provided by the boat, I could stay underwater and enjoy the site for longer than usual.  When we came up and talked, everybody seemed to have had the same experience.  Some of us asked about the name of the reef, ‘Mariveles’, and saying, “Does it come from ‘Marvellous’?”.  We wanted to dive here again but, unfortunately, the wind and waves picked up and forced us to head back to Layang Layang where we could find more tranquil waters.

Although we didn’t encounter any large fish (since the water was too warm and big fish normally come with cold currents), there was plenty of evidence that large fish can be found in the Spratlys.  By the time we had returned to the shores of Labuan, the game fishing had ended too.  Here we saw lots of huge, yet unseen, deepwater and pelagic fish including 2-metre-long Escholas, Tunas, Barracudas, Barracutah, 85-kg Giant Groupers and many others caught by the fishing boats.  All had been caught in the same area as us (Layang Layang, Dallas and Mariveles) but not in the reefs of course.

The trip to the marvellous Mariveles was without doubt the most impressive dive I’d ever done.  It created new inspiration and expectations.  My own wish was fulfilled but new wishes were also formed.  I’d like to go back to the Spratlys again, to adventure in new reefs, spend time in the untouched natural environment, discover new sites and relieve my tired heart of the city.

One thought on “Diving the Marvellous Reefs of the Spratlys”